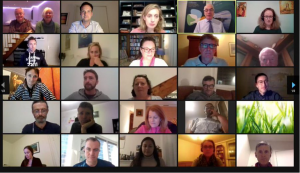 The Irish Business Network Switzerland was delighted to launch its Geneva Chapter on 11 November 2020 with a virtual event which was led by Joanne Goetz, our new Geneva Chapter Lead.

The theme for the event was Ireland’s unique role in this year of the UN’s 75th anniversary and we were honoured that Ambassador Michael Gaffey, Permanent Representative of Ireland to the United Nations in Geneva, accepted our invitation to join in an informal discussion with us on Ireland’s role in the UN and the work that he and his team do in Geneva.

It was fascinating to learn about the highly diverse range of topics that the Ambassador and his team focus on ranging from human rights and health to gender, labour and trade. He also told us a little about the important role that Ireland will play as it takes up a seat on the UN Security Council in January for two years.

As we were all closely following the potential outcome of the US Presidential elections, Ambassador Gaffey very diplomatically declined expressing any preference on the results, despite being encouraged to do so by one or two wily participants!

We ended the evening with a short quiz where our quizmaster kept us on our toes with a trick question or two.

There was a great turnout for the event and we were very pleased that a number of participants happily stayed on for a while for an informal chat and drink. We were particularly pleased to welcome friends from the Geneva Irish Association and the Geneva Literary Aid Society (GLAS) and are hoping to explore how we might find opportunities to work together in the future.

Joanne is looking forward to start planning in earnest for the next Geneva Chapter event and would be delighted to hear from anyone who might have suggestions and might even offer to lend a hand!