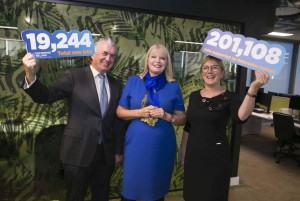 Over 200,000 people now employed by Enterprise Ireland supported companies – highest in the history of the Agency

Almost two thirds of new jobs created in 2016 outside Dublin

Enterprise Ireland, the Government agency responsible for developing Irish business globally, reported that over the period of its 2014-2016 Strategy ‘Driving Enterprise, Delivering Jobs’, 45,592 new full time jobs were created by client companies. This brings the total number of people employed by Enterprise Ireland supported companies to 201,108 – an all-time high for the Agency.

A total of 19,244 new jobs (full and part-time) in Enterprise Ireland supported businesses were created in 2016. Almost two-thirds of these new jobs were outside Dublin, and all regions recorded increases in employment. Digital Technology, Construction and Fintech were the key performing sectors. This translates into a net increase of 9,117 jobs for 2016 (taking account of job losses).

Enterprise Ireland Chief Executive Julie Sinnamon said: “Our focus over the last three years to deliver jobs and drive enterprise has paid dividends, with 45,000 new jobs recorded, breaking the 200,000 milestone of people employed in Enterprise Ireland supported companies for the first time ever. We aim to build on this success and ensure that Irish enterprise is well positioned to continue to succeed globally particularly in the context of Brexit.

“Enterprise Ireland has set ambitious targets in its new 2017 – 2020 strategy which aims to support more Irish companies with global ambition to achieve greater scale and expand their global footprint. This new strategy aims to increase client company exports to €26 billion per annum by the end of 2020 with an ambitious target to grow the level of exports to over two thirds outside the UK over the period.”

Commenting, the Minister for Jobs, Enterprise and Innovation, Mary Mitchell O’Connor TD said:“The results today reflect fantastic achievements by Enterprise Ireland and its client companies. The Strategy has driven the greatest level of job creation ever achieved in any three year period by Irish companies.

“Despite global economic challenges in 2016, job creation by Irish companies remained strong. Irish industry driving economic growth is at the very heart of our Action Plan for Jobs. As these results show, Irish companies have an unparalleled capacity to create jobs in towns and cities right around the country with almost two thirds of the new jobs created outside Dublin.The fact that over 130,000 of those 201,000 jobs are outside of Dublin is significant.Every region has benefited from these results.

“Despite the undoubted challenges ahead, I’m pleased to see that Enterprise Ireland has set an ambitious target of another 60,000 jobs in the new Strategy.”

Some of the key outcomes* from the past three years include:

3,326 new contracts secured with the assistance of Enterprise Ireland

The success achieved over the last three years gives Enterprise Ireland a strong platform from which to launch its new 2017 – 2020 strategy for Irish enterprise.

Enterprise Ireland has set ambitious targets for its client companies, against a background of unprecedented global challenges and uncertainty:

Key priorities for Enterprise Ireland will be:

–       Driving innovation in Irish enterprise to unprecedented levels through new supports to reach the target of €1.25bn in R&D expenditure per annum by 2020.

–       Improving the competitiveness of Irish companies through our Competitiveness and Lean programmes and new client engagement model, which will provide targeted supports.

–       Increasing the reach of client company exports into new markets, with two-thirds of exports going beyond the UK.

–       Major focus on the Eurozone, targeting a 50 per cent increase in exports.