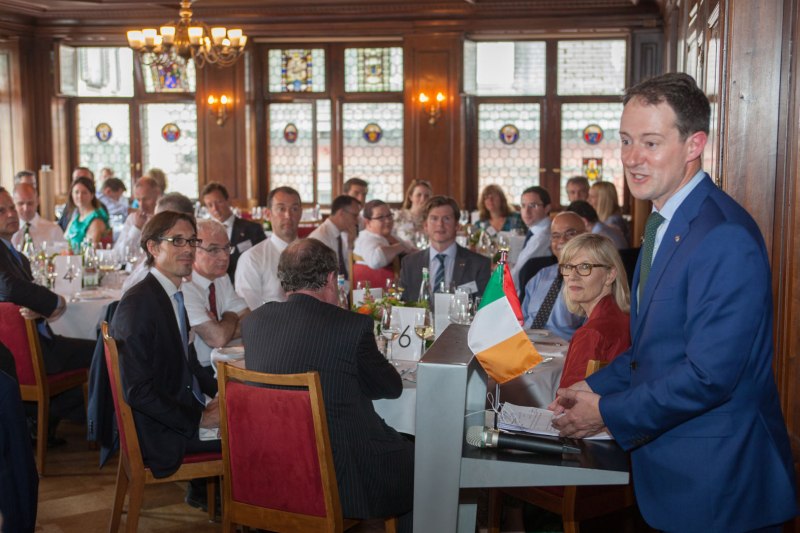 As 2015 comes to a close, we can again look back with pride on our achievements.  The network is now eight years old and has over 610 members.  The support of Enterprise Ireland and the Irish Embassy in Bern continue to be invaluable in helping us achieve our common mission of further expanding and strengthening the Irish Community in Switzerland and of course leveraging the network to support Irish companies operating in or entering Switzerland.

In 2015, we had again a wide array of successful events, which have both a business and social focus.  Kicking off appropriately in March in Basel was the joint IBN Basel chapter and the Basel Irish club event for St Patrick’s Day, which continues to be a great success.  This year we had the honor of having our Ambassador Martin Burke and Minister Kevin Humpreys attend.  In April, the Suisse Romande chapter organized a visit to the Nestlé Headquarters where Mr. Bernard Paternot, VP Z-EMENA, Nestlé introduced the company and Ms Deirdre Ryan, the Bord Bia Ambassador, introduced the Origin Green Initiative.  In May, Minister Flanagan held official talks with the Head of the Federal Department of Foreign Affairs, Federal Councilor Didier Burkhalter in Bern. In addition, in Zurich, he addressed Swiss fund and asset managers at an event organized by the Irish Funds Industry Association – IBN members were invited to attend both days.  Again in Zurich in November a very successful event was held with Brett Meyers of Currency Fair; Ed Grant of Solgari and Patricia Widmer from HSG presenting Women back to Business. In December the now traditional Basel event featured Ruth Nallan of Java Clinical Research, Glen Farrell, of Sourcecode and Nicolas Ranninger of Bord Bia

From the EI perspective, Switzerland is Ireland’s 6th largest export market, ahead of larger countries such as: France, Spain, Italy and the Netherlands. Total bilateral trade last year was almost 6 billion Euros. Economic exports from Irish indigenous companies to Switzerland have grown a very impressive 47% over the last 3 years – averaging over 15% growth per annum (total last year of 275 million Euros).

As Irish professionals living in Switzerland and members of the Irish Business Network Switzerland, we can continue to provide assistance to Irish companies that are looking at the Swiss market. Throughout 2015, the network has facilitated many introductions to key decision makers here in Switzerland, which has become a key market for so many Irish companies, amounting to tens of millions of euros in exports from Ireland this year.  This is making a vital contribution to the nation’s recovery.

Ultimately, though, this network is about the members – over the last 12 months, the Network has continued to grow.  We look forward to welcoming new members so pass on the website www.irishbusinessnetwork.ch or our LinkedIn Group or our new Facebook Page. Please don’t forget to share our promotional video amongst your friends and colleagues.

However, none of this would have been possible without the IBN core team and the Enterprise Ireland team headed by Eddie Goodwin. This year the core team remained stable but we had changes at the embassy.  During the summer, we said farewell to our Ambassador Martin Burke and welcomed our new Ambassador Breifne O’Reilly. Already our new Ambassador has attended events in both Zurich and Basel to get to know the members.  In addition, the deputy head.  Joanne King is returning with her family to Dublin where she will be taking up a more senior position. We wish them all the best in their future endeavors.

Looking forward to 2016 – we surveyed our members to ascertain what their interests are – frequency of events, topics etc.  We are taking this feedback to our annual strategic meeting in January to ensure an even more interesting programme for 2016. These themed events give you the opportunity to meet likeminded professionals based in Switzerland, hear from interesting speakers and build your own professional network.  We are also interested in hearing from companies in Switzerland interesting in hosting an event in Basel, Zurich or Suisse Romande – please contact the local chapter head for further information.  Last but not least, we will be exploring a new feature in 2016 – member benefits – which will allow members to avail of special offers from selected companies such as Currency Fair– watch this space!  In Basel we also piloted the two-minute open mike session where a few members introduced themselves and their business in Switzerland – feedback was very positive so we will consider building this into all future events

I would like to take this opportunity on behalf of the Irish Business Network Switzerland, to wish you and your families a good start to 2016. I would also like to thank you for your support for the Network in 2015 and we look forward to your ongoing support in 2016

Reports and Letters from IBN Presidents