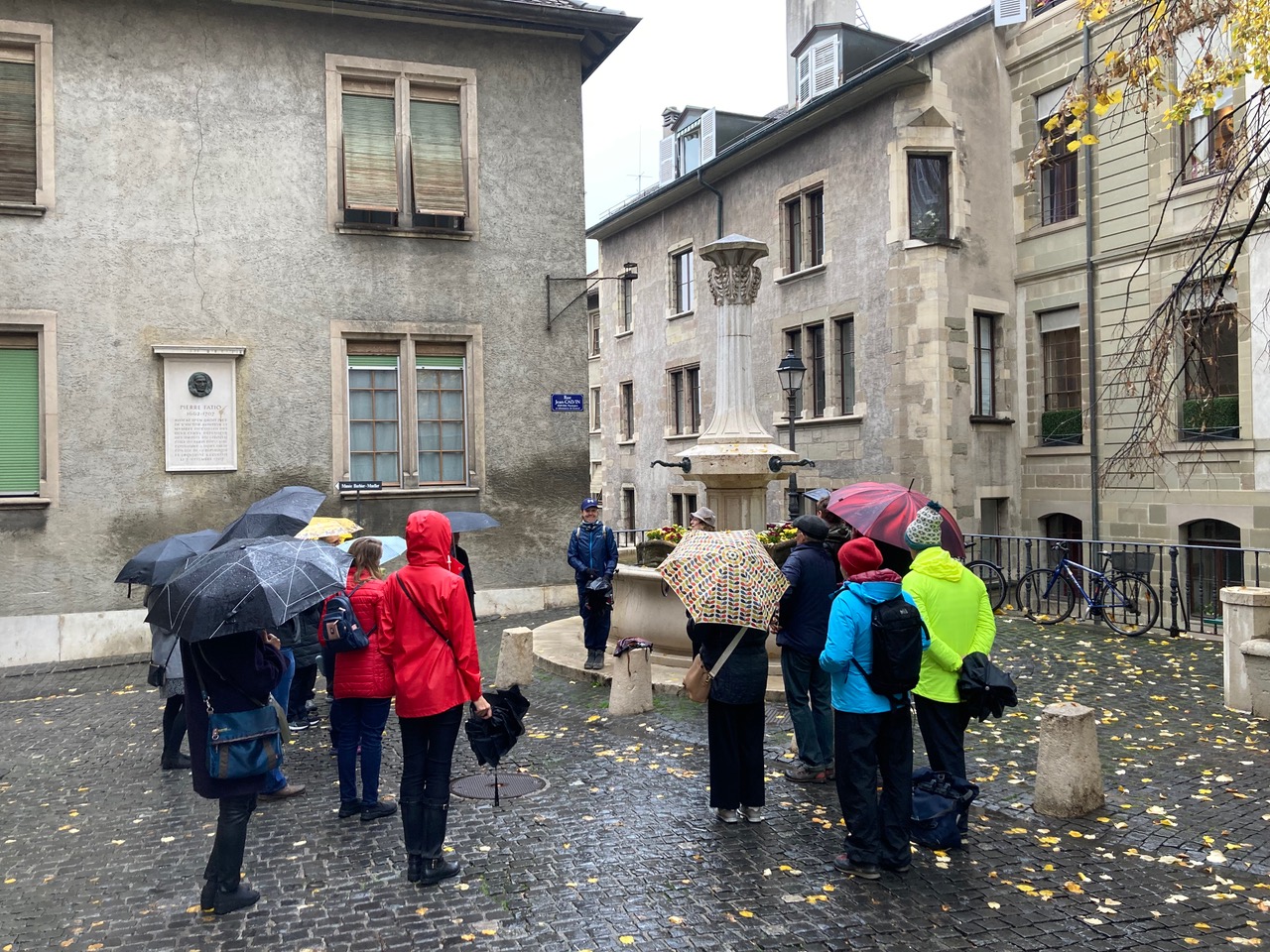 We were delighted by the turnout for our walking tour in Geneva on 30th October 2021. Despite the rain, we were able to welcome a lot of new faces to the IBN on our walking tour of the city.

Our wonderful tour guide Debra Kinson not only provided us with an insight into the diverse history of Geneva but also filled us in on Irish links to Geneva and Switzerland.

Our day started at the Brunswick Monument where we learnt about the somewhat eccentric Duke of Brunswick who had bequeathed his fortune to the city of Geneva on condition that a monument be built in his name. His legacy was also used to build the Grand Théâtre de Geneve.  Our next stop was the Île Rousseau where we heard about the great Genevan philosopher, writer and composer, Jean-Jacques Rousseau, and many other literary connections to Geneva. Lord Byron, Mary and Percey Bysshe Shelley spent three (rainy) days together inside the Villa Diodati in Cologny creating stories to tell each other, which would subsequently inspire Mary Shelley to write Frankenstein.

Of course we could not speak about literary figures without mentioning James Joyce and his ties to Zürich, and we discovered that, following a trip to Switzerland, Oscar Wilde apparently stated “I don’t like Switzerland, it has produced nothing but theologians and waiters”.

We walked down to the Place du Molard where Debra filled us in on the history of the historical port and economical hub of the city. On our way to the Cathedral, where we heard about Jean Calvin and the Protestant Reformation in Geneva, we passed by the building where Henri Dunant, along with Gustave Moynier, Henri Dufour, Louis Appia and Theodore Maunoir, founded the International Committee of the Red Cross in 1863, which subsequently led to the signing of the first Geneva Convention in 1864.

The group had an opportunity to get to know each other and network over lunch and it was great to see the enthusiastic response from the diverse group which brought together both younger and older members, as well as people working in the international sector, private sector and retirees.

Before moving over to the International Quarter, we visited the Reformation Wall, where we were somewhat surprised to find a statue of Oliver Cromwell. And while we were there, many of us were also quite surprised when Debra told us about the Geneva Barracks which was built in Co. Waterford in 1783 as a settlement for a group of disaffected citizens of Geneva following the Geneva Revolution of 1872.

After a short tram ride over to the Place des Nations, where we heard the history of the Broken Chair, we also learnt that Sean Lester, an Irish Diplomat, was the last Secretary-General of the League of Nations in 1946 before it was replaced by the United Nations.  We noted a number of the UN agencies located in the quarter and as we walked down to finishing our tour at the Maison de la Paix, we passed by the UNHRC and noted that it was to take on the role here as UN High Commissioner for Human Rights in 1997 that Mary Robinson has resigned as President of Ireland.

We were delighted that despite the weather and the early start, many members of the group were happy to stay on after the end of the tour and continue to get to know each other and share experiences of living in Switzerland.