Gender Equity in Switzerland – Progress for all: Report

Gender Equity in Switzerland – Progress for all: Report 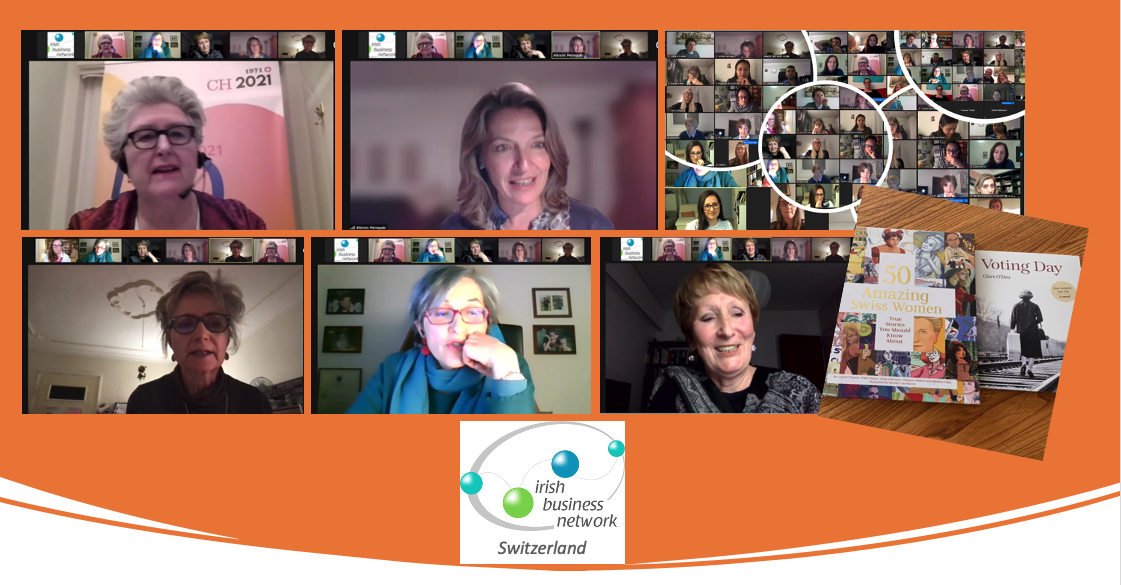 4th March, 2021-A thought provoking discussion took place today at the Irish Business Network event with an incredible panel: Zita Küng, President of CH2021, first head of the Zurich Bureau of Equality; Alkistis Petropaki, head of WeAdvance; Marialuisa Parodi, President Faftplus, Ticino and Tabi Haller-Jorden former head of Catalyst, Europe and President and CEO of the Paradigm Forum. These experts considered the recent 50th anniversary of women’s right to vote at Swiss Federal level and shared their vast experience with their audience.

The discussion traced the history of this vote, and the long ongoing path to equality, a path which still stretches far ahead today.  When attempting to understand the current situation IBN co-president, Geraldine O’Grady, later reflected on the discussion and the ‘internalised oppression’ of women in Switzerland which was touched upon as this reminded her of what some historians’ term the ‘learned helplessness’ suffered by poor Irish peasants around the time of the Irish famine.  Tragic but true for Ireland, true for Switzerland and Swiss women even today?

A discussion of the current situation, the bottlenecks to progress and the need for culture and mindset change set the ball rolling. The scarcity of male participants at the event was noted with dismay as it was felt that problems relating to gender equality are not “women’s” problems, rather they impact all members of society negatively – both here and elsewhere.

The infrastructure problems in Switzerland, with broken school timetables, lack of childcare, expectations of women’s place in society and the number of women working part time -largest in the OECD– formed part of the discussion. While part time work may seem to be a good solution in the short term when dealing with the unfriendly school and childcare infrastructure, the number of women who do not have access to adequate financial resources at retirement age is unacceptable and the feminisation of poverty is a very real problem.

Financial independence and security were discussed and the importance of women being financially responsible for their own wellbeing, was underlined.  We learned that while in the U.S. almost 30% of women between 18-35 years of age earn more than their partners, a change comes (probably) with the advent of families.  Barriers and hard choices become the norm from that moment on. This situation has led and continues to lead to a profound dependance by women on their partners, hence the need for education of young people about financial responsibility, and this from an early age.

What does it take to change the mindsets of a society to ensure equal treatment and opportunities? The perception that if women are represented at parity level, children suffer is a perception that needs to change as a matter of urgency. Indeed several Swiss studies show a positive correlation between attending quality day care centres and school progress, as IBN co-president Brigid O’Donovan shared in the chat.

Do we need to change ourselves or change the system we operate in? The ensuing discussion about business education and the moral courage needed to stand up for oneself was an important one. The moderator of this discussion, Mary Mayenfisch, did insist on the need for better protection and legislation to allow the voices of people with such courage to be heard and protected. It is interesting to note that even today the protection of disruptive voices and whistleblowers is not assured under Swiss law. Moral courage is necessary to ensure the necessary changes for a society but legal protection of the people calling out for such change is also crucial. Participants were invited to not simply wait for the necessary policy changes to come about but to ask themselves whether they themselves are role models for the values they espouse around equity. What have we all done to represent our commitment to this agenda?

Women in politics and in business

Looking to the business sector, reference was made by Alkistis Petropaki to the work carried out with the University of St Gallen, the Gender Intelligence Report and Maturity Compass and the measurement of the four stages of Gender Maturity.

It was noted by the speakers present that more women on boards leads to higher profits and as a member of the panel said quoting Viviane Reding, former Vice President of the European Commission “I don’t like quotas, but I like what they do”. As the evidence clearly shows that diverse teams and boards of companies ensure better returns for business the question as to why there are not more women on boards in Switzerland is a very relevant one.2 https://www.schillingreport.ch/en/mediarelease-schillingreport-2020/

And what about the intersection between women politicians and women in business, could an alliance be formed in Switzerland to push harder for change? Many multinational companies operating here are very concerned about diversity, inclusion and equality but do they reach out to the Swiss politicians fighting for the same rights?

Looking beyond Switzerland to a country like Rwanda it was mentioned that this country has the highest number of women parliamentarians in the world, and that they have an incredibly effective government. A good role model for Switzerland?

Finally, the use of Environmental, Social and Governanace (ESG) factors by companies to ensure better performance and governance, the small number of women in Switzerland ready to engage in early entrepreneurial activities (7.3 % compared to 12.3% of men), the need to sponsor rather than mentor women, the role of sociology and its importance in ensuring progress, the uneven distribution of work, so much to discuss but unfortunately, our time ran out all too quickly.

A great event with an active, engaged audience – many thanks to the panelists and participants. Many thanks also to Bergli Books and Clare O’Dea for donating copies of ‘Voting Day’ and ‘50 Amazing Swiss Women’ as prizes for two lucky winners.

For further reading you might like to take a look at this Manifesto sent to the Swiss Federal Council by Zita Küng and the members of CH2021.ch on the 50th anniversary of the vote – 7th February 2021- urgently requesting the Swiss Government to put in place an action plan to ensure real equality…… now.